Well, I Can Top That! 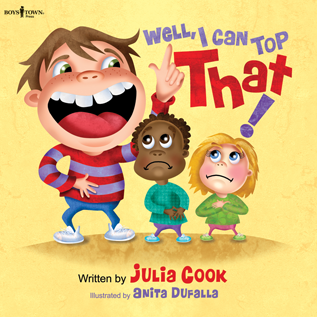 Brad has a lot of great things going on in his life or at least that’s what he tells all of his classmates!

When one student won a contest, he told about how he won an even bigger contest!

When another student broke his arm, he told about how he broke both arms AND both legs!

Help children learn how to be good friends by sharing the spotlight.

Children and adults will get a real kick out of Brad’s tall tales as he learns the importance of being a ‘Pull-Upper,’ not a ‘One-Upper.’

This book is part of the Communicate with Confidence series from Boys Town Press, designed to teach kids key skills that will help them be more successful by mastering the art of communicating.

“[A]n outrageous story about Brad, a boy who liked to brag, telling exaggerated stories or tall tales to impress friends. Brad really wanted to just have friends, and he found that his behavior was not impressing friends or making new ones for him. One day his teacher helped him understand that he needed to change from being a ‘One-Upper’ to a ‘Pull-Upper,’ someone who lets a friend take the spotlight … and gives them support instead of always competing with them. Well, I Can Top That! is filled with humorous, colorful tall tale exaggerations and expressions and… expressive illustrations. It will mesmerize its intended audience; children ages 6-10… A helpful list of tips for parents and educators on bragging behavior is included.”
~Midwest Book Review, Children’s Bookwatch, June 2014

“Bragging can have such a negative impact on social relationships. Julia’s incredible talent with words, coupled with amazing illlustrations, takes a sensitive topic and makes it understandable to children. This book allows children to understand the problems bragging creates and offers specific strategies to help them change their behaviors. It incorporates self-reflection and skill building with the message that you make friends by choosing to be a ‘pull-upper’ instead of a ‘one-upper.'”
~Melissa A. Louvar Reeves, Ph.D., School Psychologist, Licensed Professional Counselor, and University Lecturer